Posted on January 1, 2015 by Rick Bettencourt

I am 100% committed to publishing entertaining books that lift the human spirit. While Dan Sexton’s erotica may seem a stretch in that regard, it’s exactly on target. Under Dan’s pen, I’ve recently published Handy Men Do It Better. Honestly, it’s rather controversial.

For gay fiction, or mm romance (man-on-man or male-on-male) books, the stigma is also changing.

I credit God’s greatest creation, women, as the one of the reasons. Females are the number one consumers of mm romance fiction and also author some (if not most) stories in this genre.

Don’t be fooled into thinking his debut Handy Men Do It Better is an all-sex book. Its cover may be something you care to judge it by. 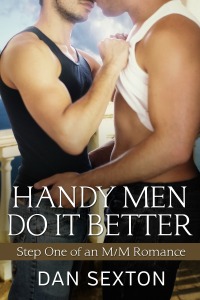 Yes, this book is steamy, but Dan Sexton pens the beginnings of a romance between two “straight-acting” men with an intriguing story line—something I hope (as his publisher) will have you salivating for the next release.

To handy men, Jake and Cory, building a relationship is a lot like designing a home or landscaping a yard. It’s hard work. Using just the right tool helps.

And, tools fly quite readily in this book.

Some people think the men in Dan’s story are immature. Well, exploring true intimacy for the first time may have some acting like a teenager, despite that they’re pushing thirty.

Find out why here.